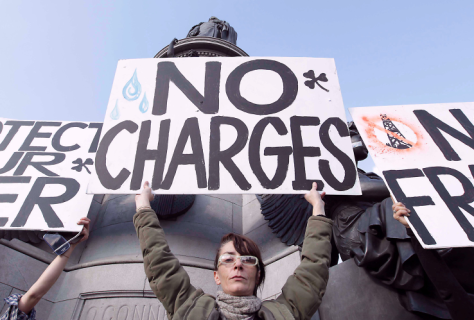 The news, and every puddle in the country are awash with water at the moment but it seems there is going to be a lot of water under the bridge before there is any end to watery talks and watery weather. It’s hanging over us like an uncomfortable wet blanket and voices that have never spoken in public before have spoken, like the voice of Donna Hartnett, the fed up and frustrated working mother of two, whose letter to the Irish Government went viral after it was published in a national paper. In it, we read the frustrated thoughts of a mother brought trying to work outside and inside the home but still couldn’t meet the demands of the Irish government. The much-maligned water tax proved to be the final straw for the Hartnett family and so it does for many folk as thousands of other families identified with her message.

What struck me was the point that Donna made in her letter regarding her 4 year old and her 20 month old baby. Donna had calculated that her children were out of their home longer than the average industrial worker and are “being raised in childcare centres like hens.” This was not an attack on any childcare facility but the reality is a vast majority of children in Ireland, the leaders of future Ireland are being not being nurtured and spending quality time with their parents in their own homes. And when they do, the parents are overwhelmed, and no doubt stressed with the worry of making ends meet thanks to the Irish Government and its introduction to squeezing every penny it can out of every household. In her letter, Donna writes that she has decided enough is enough. She has now quit her community executive job to “give my children their childhood back.”

It would seem Donna felt her only way of expressing her anger and concerns was to write to a national newspaper to vent her frustration at the never-ending spiral of bills and taxes facing working families. Interestingly, an anonymous writer turned to this newspaper a few weeks back to express her concerns about the pressures she was experiencing while raising her children. It is common enough to turn to a newspaper to express fears, concerns, and opinions, quite often printed in letters to the editor but the fact that a mother’s letter quickly went viral and was viewed more than 15, 000 times says a lot about this country. Clearly, the Irish Government isn’t listening. The ongoing water fiasco proves that. The downpour of abuse and aggression towards Irish water has only caused storms and overflowed tension that has the Government teetering on the edge of a revengeful water fall.

And so are families up and down the country. Since a letter from a mother in Cork has attracted so much unity and resonated with so many people it would seem shooting from the heart has awakened the Irish voice that has echoed round the country in various other mediums. As Donna said in her letter “I know we are not alone – there are tens of thousands of other Irish families in exactly our position. People who never took a gamble on the property or stock markets. What is the point of working to pay State bills or taxes when you feel that the real losers are your own children?” Like thousands of others, I hear you Donna. Taxes are necessary but the water charge has proved to be a murky tax too far that only seems to be pouring pressure on families and on their children’s future.